Skip to content
Free shipping on order over $150
Fifteen years ago, artist Ando Saeko came to Vietnam from her native Japan, and fell in love with Vietnamese natural lacquer painting (sơn mài). She was accepted as a student by Trinh Tuan, a master of the art form, and has been here ever since. Last Sunday morning at Hanoi's Uzu Gallery, Saeko explained the origins of natural lacquer and how lacquer painting evolved in Vietnam.

The term "lacquer painting" may be confusing; most of us probably think of lacquer as an additive to paint, or as a synonym for "varnish." I doubt many of us know that lacquer is a natural product made from the sap of an Asian sumac (the Vietnamese species is Rhus Succedanea). The sap is obtained in much the same way as rubber: an incision is made in the bark of the tree, and the resin is collected. The liquid separates as it sits; solids sink to the bottom and the pure resin at the top is skimmed off, mixed with pine sap, and stirred continuously for three days to give it an even texture. The resulting glossy material – processed natural lacquer – is used by artists. 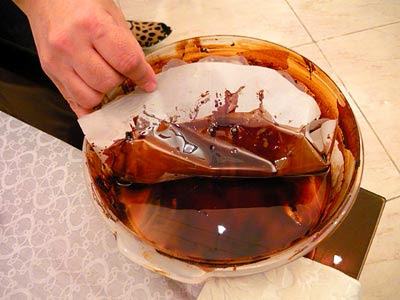 The history of lacquer painting in Vietnam demonstrates this country's ability to take foreign influences, and create from them traditions that are wholly Vietnamese. Archaeologists have found lacquered objects dating back to the 4th century B.C., but lacquer was used mainly as an adhesive until the 14th century when, using techniques that are believed to have originated in China, it bloomed as a decorative medium. Lacquer began appearing as a glossy varnish on pagodas, wooden panels, palanquins, and other valuable objects, especially those of religious value.

It was the French who helped transform lacquer from a decorative craft into a modern pictorial art form. In 1925, teachers and students at the French École Supérieure des Beaux Arts de l’Indochine (Indochinese College of Fine Arts) began stretching the possibilities of the medium, taking traditional techniques and infusing them with contemporary artistic conceptions. The modern tradition of Vietnamese lacquer painting dates from this time. 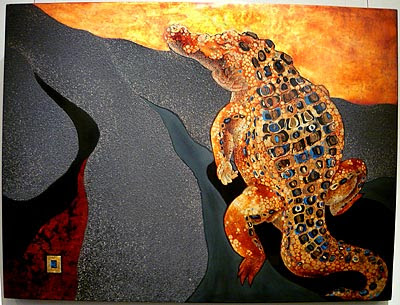 Lacquer painting is a laborious process; it may take months or even years to complete a work. The term "painting" is, frankly, something of a misnomer; the medium is as sculptural as it is painterly. The technique of building a painting through layers, and of manually manipulating the surface, is as much a part of the process as the use of natural resin.

The foundation for a lacquer painting is a plywood board that has been covered by up to ten layers of lacquer. The artist may cut into this foundation to inlay crushed egg shells, gold leaf and other materials, or inlay materials directly onto the adhesive surface. Powdered pigments are lain directly onto the wet lacquer; color is built up in layers. Between layers, the artist continually scrapes, sands, polishes, and buffs the surface, to ensure an even finish. Since lacquer does not technically "dry" but rather hardens through the activation of an enzyme, the artist must be aware of ambient temperature and humidity; in less than optimal conditions one may have to wait days before applying new layers. 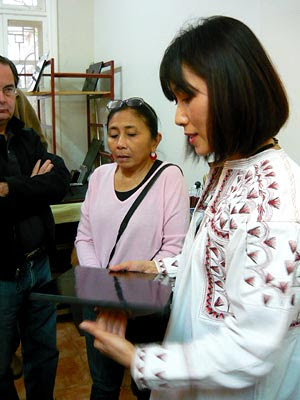 The result of all this layering, however, is that natural lacquer has translucent, muitidimensional qualities that could almost be described as holographic. Light plays on and under the surface of the painting. In much the same way that light fractures in water, the eyes perceive light and movement at multiple depths. One wonders what Monet, with his waterlillies, may have made of this stuff; it seems perfect for capturing the motile play of light and color that was so much a part of his oeuvre. In other words, a lacquer painting, like the tradition it comes from, is fully and vibrantly alive.